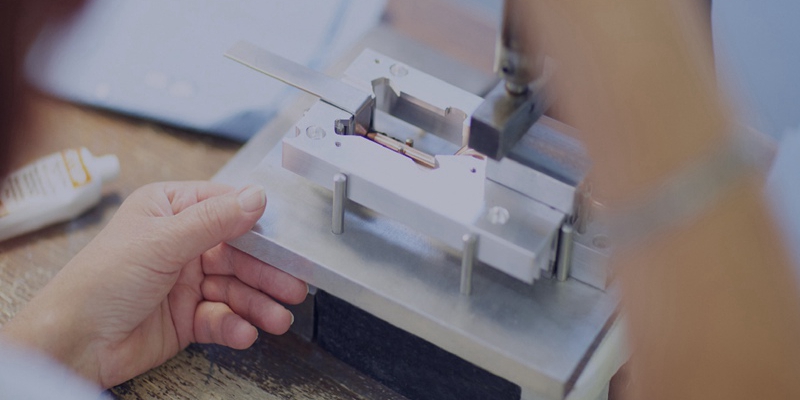 These methods in addition with time-saving are also cost-effective. One such rapid prototyping technique being employed these days is urethane molding which is quite similar to injecting molding with slight differences. This technique produces the best functional prototype with the desired characteristics.

This process is quite similar to injection molding in which hard tool is used instead of soft silicon tool. Precautions must be taken while designing the master pattern for urethane molding to ensure that it should possess the desired properties. A functional plastic part is the result of urethane molding that can be presented as a model or used in a fully functional product.

Generally, four steps are followed in Urethane Molding as enlisted below

In the second step, the master pattern produced is encased in liquid silicon in order to produce an accurate mold.

After the mold is cured, it is cut into two halves. The resulting cavity produced is used for the casting of the end product.

In the final step, the manufacturer injects urethane or some other resin to fill the voids. After the material is cured, it will be removed from the tool. This process is repeated until the desired product is produced. 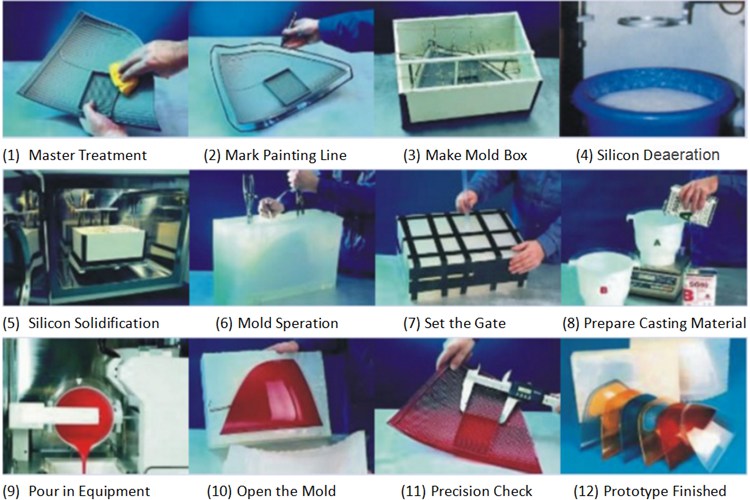 A casting system is a system of elements required to perform the casting operation correctly. In Urethane Molding the casting system consists of a funnel, casting channel, air channels, urethane mold release agent and fixtures to hold the mold halves together. All these elements are arranged in a particular way in order to execute the casting process correctly.

The casting channel and funnel are tubes made up of plastic connected to the hole of the mold. The material is poured into this hole and flows through the channel and funnel. Greater the height of funnel, greater will be the casting pressure so that the polymer is able to fill all the features of the pattern.

Air vents are present on the opposite side of the mold so that air can flow out when the material is being poured into the pattern for manufacturing of the product. A urethane mold release agent is basically an air film that prevents the casted part from sticking onto the mold. The release agent is used to remove the protruding element produced as a result of friction present between the casted part and the mold. It also covers some of the microscopic holes produced during the casting making the casted product smoother.

4. General Tolerance in the Casted Part

A tolerance of ± 0.010 in. or ±0.003 in. per inch of the part is typically expected in the casted part. A shrinkage rate of +0.15% can be expected due to thermal expansion of the liquid, and the response of the flexible mold. Irregular or too thick geometries might cause deviances or deflection because of shrinkage.

The surface end is outwardly smoothened to a material or matte surface. Grow lines may be present on internal or hidden features. Polishing or custom finishes must be clearly defined. The shrinkage or surface finish of the product depends upon the design of the master pattern. Therefore precautions must be taken in the design of the master pattern.

Urethane molding is used to manufacture products having certain physical properties. So the material being used in the casting process will greatly affect the physical properties. Therefore it is conducive to many different types of polyurethane plastics, ranging from rigid to flexible. Some of the most common materials used in the process include:

The cast in color provides specific texture to the product. Moreover, the cast-in color cannot be peeled off the surface and there is no chipping. But the cast-in colors are limited in number so the color of the specification may or may not be available.

In painting the object after its casting there are many colors available so that the color might be according to the specification. Furthermore, when the paint is done after the casting, the lines that are left after separating the product from the mold can be removed hence giving a uniform surface appearance to the product. But paint after the casting requires the labor after machining which causes an increase in the cost of production. Also, the paint might provide great protection against the ultraviolet radiations but can be easily peeled off which is another con of painting the surface. 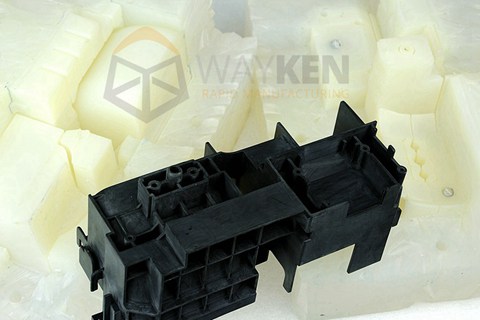 Injection molding and Urethane are generally similar processes. The differences lie in the details related to manufacturing practices.

The first difference between injection molding and urethane molding lies in the manufacturing of their tools. Injecting molding employs a hard tool as compared to the soft tool used in urethane molding. Therefore urethane casts are made by molding a 3D printed model of the finished part, whereas injection molding tools are machined via CNC grinding, milling, and other processes.

High-quality plastic used in injection molding is more expensive as compared to the urethane or polyurethane resin being employed in the urethane molding. If one has to produce fewer prototypes it is better to use urethane resins. For products that are supposed to be used for long run, or with applications with certain tough physical properties, proper plastic must be used and the injection molding process should be used.

Injection molding tool requires more intricate and extensive machining to create and usually are not ready for several weeks. A typical lead time of almost two months might be required for the manufacturing of injection molding tool. Whereas urethane casts consume relatively lesser time for production usually requiring just a 3D printed model and a soft mold to be created around it.

As the prototypes are made by silicon molds in urethane molding which is comparably less durable and does not last for more than 20-25 parts. Therefore this process is suitable for situations where production volume is low and lesser parts of high-quality, precision and performance characteristic would be required. Some of the applications of urethane molding are listed below: 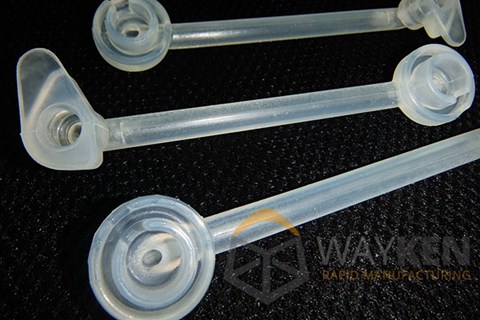 Chemical Resistances: Products produced by urethane molding have excellent resistance to most solvents, chemicals, aliphatic based oils, and greases.

Coloring: Two coloring options are available in urethane molding both having their pros and cons. Generally, cast-in colors are used which is peel resistant.

Dimensional Stability: Urethane resins have excellent dimensional stability over a wide range of pressures and temperatures. Products produced by this method are highly elastic and can be stretched to substantial elongations without deformation.

Environmental Resistance: Urethane is substantially inert in the presence of ozone and oxygen. It is more resistant than natural or synthetic rubber to sunlight and general weather conditions.

Impact Resistance: While conventional plastic materials can become brittle as they become harder, urethane retains elasticity and strength over the complete range of hardness.

Machinability: Urethane products can be drilled, tapped and machined like metallic products.

Resilience: Urethane polymers can be custom formulated to give hard polyurethanes similar resiliency as much softer materials, making urethane an excellent material for shock/vibration absorption. 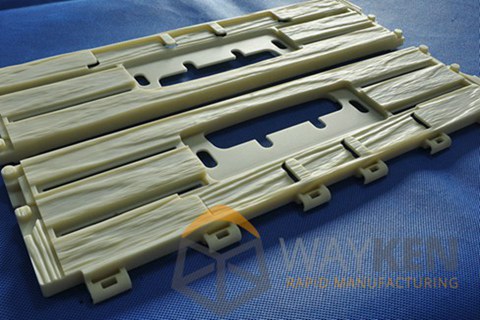 Urethane molding does have a few drawbacks. In case of production of any complex part, the master pattern that is designed may not cover all the features. Moreover, they involve a lot of hard work to remove casts and excess material, which introduces errors. In case of any air bubbles trapped in the casting, materials will cause the cast to become brittle or prevent thin walls from filling completely. Another limitation of urethane molding is that the mold is fairly temperature sensitive and cannot sustain extended periods of time above 270 degrees Fahrenheit.

So urethane molding is one of key rapid prototyping technique that is employed when the production volume is low. It allows to produce prototype and present it to the people before its mass production saving cost and a lot of money of tooling. Moreover, the physical properties of urethane products as described above gives it an advantage over conventional materials which have less strength and hardness. Thus if the production quantity is low, urethane molding is one of the best manufacturing technique to be applied which is quite much similar to that of injection molding which is used in case of high production volume and uses a harder tool instead of a soft tool.